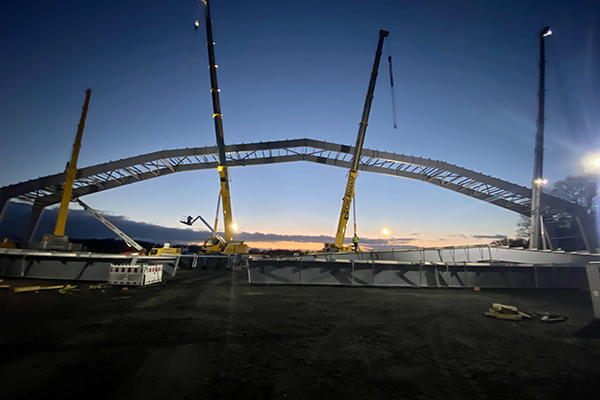 The Dethlinger Pond – formed by rainwater collecting in an abandoned diatomite pit – is located between Hamburg and Hanover. It probably contains the world's largest chemical weapons legacy. From 1940 to 1952, explosives and chemical warfare agents were dumped into the former diatomaceous earth pit. Explosive ordnance disposal began in 2019. An initial salvage operation discovered 2,500 toxic chemical weapons – but that was just the beginning. The Lower Saxony Ministry of the Environment assumes that there are more than 100,000 different explosive ordnance items in the filled-in pond, which is assumed to be ten to twelve metres deep. The area has been closed off extensively and is guarded day and night. The cleanup is scheduled to start in spring 2023 and to last five years.

To facilitate the cleanup, the Dethlinger Pond is currently being built over with a steel structure by the company Astron Buildings GmbH from Mainz, Germany. For the foundations, the unusual conditions of the site need to be considered. Thus, the horizontal displacements of the foundations have to be measured and recorded by a geodesist during construction. The steel hall has a footprint of 97 m by 106 m and is 22 m high at the ridge. This makes it almost as large as two soccer fields. This huge structure, with 18 axles and frame spacing of 6200 mm, requires a delivery of around 50 truckloads.

The supports are formed by a 400 m long concrete structure, secured by a sheet pile wall anchored 22 m deep in the ground. The roof area is approx. 10,000 m2 and was dimensioned for the exceptionally high snow load of the "North German Lowlands". The truss height is 1970 mm and the weight of the heaviest component of the building is the truss with 3572.6 kg.

This multi-million-euro renovation work is currently the largest remediation project in Germany in the field of explosive ordnance disposal. The assembly of the steel hall with its impressive span of 97 m without any disturbing supports is progressing very well. To date it is also the project with the largest free span in Astron's more than 50-year history. It is being realized together with Astron's builder dealer of many years, the company Cornils GmbH from Bergen. 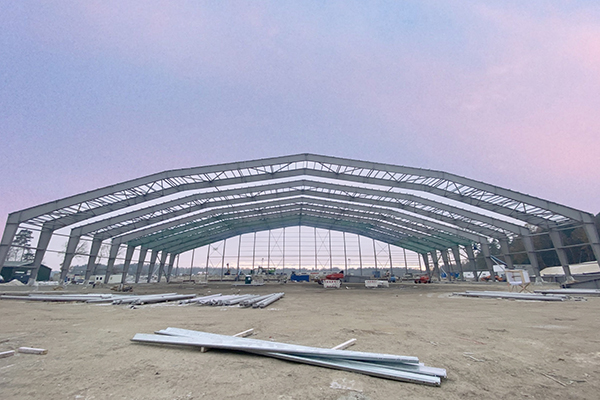