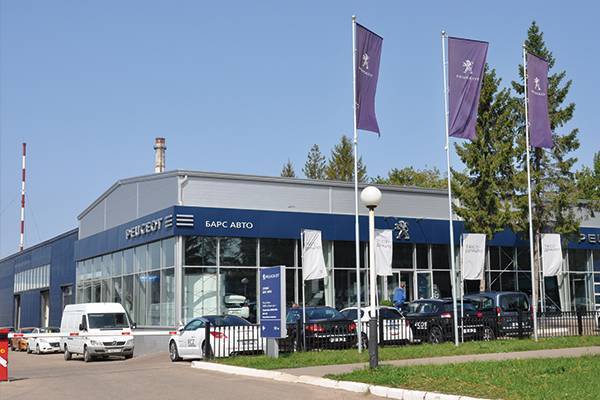 Peugeot car dealership which consists of a show room and a service station was erected in Kazan, Russia, by Technologii Stroitelstva, Astron Builder. The new center offers customers a complete set of sales and technical services for Peugeot cars.

The complex unites two Astron buildings cladded by sandwich panel walls produced by Technostroy. A show-room with an area of 650 m² features a full range of Peugeot cars. Erection of each building was 2 months.

The customer first met Technologii Stroitelstva at the construction fair in Kazan in 2010. Beginning 2011 he called the Builder with a request for a building of a car dealership. Rail Sadykov, Manager of Technostroy Representative office in Kazan: “Customer’s main requirement was to install gates in each bay spacing. The main advantage of our offer was that we applied wind bent instead of cross windbracing. In close contact with the customer, step by step, we developed an optimal configuration of the show-room and then signed the contract. When the first building was still under erection, the customer decided to build a second one of the service station. In 2012 we designed the final configuration of the second building”.

Technologii Stroitelstva became Astron Builder in 2008 and since then completed 21 buildings. We congratulate Vladimir Koktysh, Director of Technostroy, with the victory and wish him and his company success!