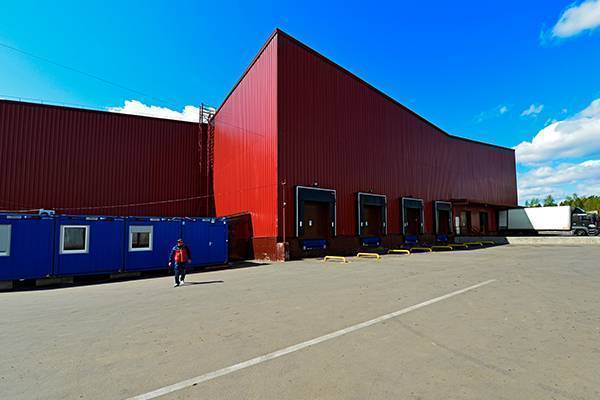 A Storage Depot for Industrial Goods in Moscow Region

A new storage facility with an area of 8,700m² was built in village Brekhovo in Moscow region by KS Investroy, Astron Builder from Moscow. Bright impressive exterior of the building won likings of Astron jury who awarded it “Building of the Month”.

The new warehouse belongs to Xenon-Energo company, which specializes in production and distribution of industrial goods. Due to the growth of sales and lack of facilities the firm took the decision to build a new storage. The choice of supplier and general contractor was clear – only a year ago KS Investroy had constructed a similar storage of 3,000m² in the same industrial park. The Customer was pleased with it: optimal price/quality ratio, professional project approach of the Builder, Astron solutions. He recommended Xenon-Energo to trust their project to KS Investroy, and they did.

A 4-span building is 96 m wide. Building configuration was defined by the shape of the land plot and already existing buildings. The walls are LPA900 system, on the roof – LPR1000. The roof is equipped with slope skylights which allow the use of natural lighting.